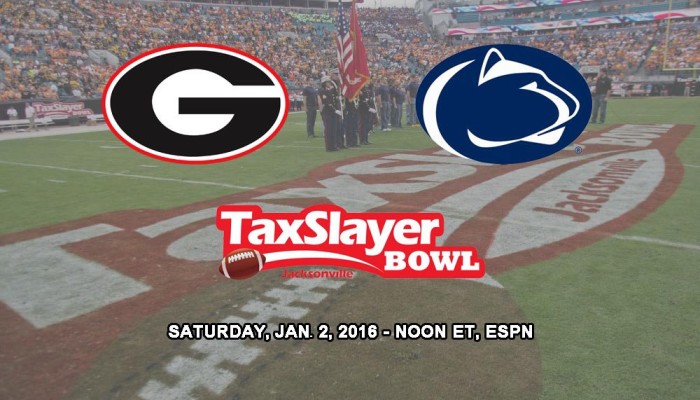 Pennsylvania State University will play the University of Georgia in the Saturday, Jan. 2, 2016 TaxSlayer Bowl.

“Both Penn State and Georgia have storied football programs with fantastic fan bases,” said Duncan.  “We are thrilled to host these two top-notch teams and their players, coaches and fans in Jacksonville for a great day of football.”

The Nittany Lions and the Bulldogs have only squared off once, in 1983’s Sugar Bowl, as the teams battled for the National Championship.  Penn State defeated Georgia by a score of 27-23.

The TaxSlayer Bowl will be played on Jan. 2, 2016 at 12 p.m. at EverBank Field in Jacksonville, FL and will be nationally televised on ESPN.

Up to this point, it was the only meeting ever between these two prestigious schools.

The Bulldogs began the 2015 season with high expectations, but back-to-back disappointing losses to Alabama and Tennessee in October derailed a once-promising season. The offense struggled with the loss of star running back Nick Chubb and uneven quarterback play.

The 2015 season was James Franklin’s second in charge of Penn State. The Nittany Lions got off to a 5-1 start, but finished the season on a three-game losing streak.

Go see Glenn as he has been in the business since 1980. Service is the name of our game, as we want you to come to us on Baymeadows Road for all your jewelry needs. Need Cash fast!? Premier Jewelers buys your unwanted gold jewelry on the spot! Sell your broken gold, scrap gold, or gold you just don’t want to wear anymore. Premier Jewelers also offers on site Jewelry repair. Stop by and see the Premier Jewelers difference.