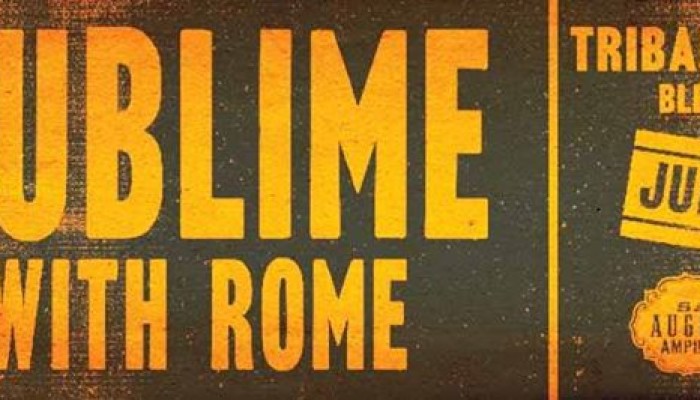 Sublime with Rome in Jacksonville

Sublime with Rome in Jacksonville – 40oz to Freedom FTW

1992s double-platinum 40oz. to Freedom, 1994s gold Robbin the Hood, and 1996s 6x-platinum self-titled major-label debut  the band has now sold more than 17 million albums worldwide. Nowell died of a heroin overdose two months prior to the release of Sublime, which reached No. 13 on the Billboard Top 200, sold six million copies, and spawned such hits as What I Got, Santeria, and Wrong Way, which remain radio staples across the country. Profoundly affected by Nowells death, Wilson never considered performing the groups music live without their front man. It took the talent and enthusiasm of Rome Ramirez  a genial, now 27-year-old newcomer and gifted songwriter and musician  to change that. Growing up in the Bay Area, Rome began singing and writing songs as a teenager and was playing solo gigs around the Bay Area when he met Wilson when the two were recording at the same studio. An instant friendship and musical bond was formed and that Fall, Sublime with Rome entered the studio to begin recording their debut album. The result was Yours Truly, released in the summer of 2011.

The album both picked up where Sublime left off and built on what theyve accomplished, thanks to the fresh infusion of energy from Rome who brought in lyrics, melodies, and chords hed written over the past few years. With the release of Yours Truly, Sublime with Rome spent the rest of the year touring the world and treating fans to both new songs as well as Sublime favorites that many never had a chance to hear live. Bringing things full circle, the bands first performance of 2012 was at the Smokeout Festival, joined by celebrated drummer and longtime friend Josh Freese. Now Sublime with Rome has released Sirens, the effervescent follow up to Yours Truly. “We had more time, we know each other better now, and we’re even better musicians,” said Rome Ramirez, who was just 20-years-old when he embarked on this journey. Now 27, the singer, guitarist, and songwriter is truly flourishing. Sirens is overflowing with standout songs, such as the mellow yet buzzed out title track, featuring Dirty Heads. Then there’s “Skankin’,” which is a Fishbone song that Sublime used to cover in their own unique way back when. It was an unrecorded fan favorite that sounds like an old demo! “We’re covering Sublime covering Fishbone!,” Ramirez exclaimed. An instant summer classic is the slow-burning and chill jam “House Party” which has a groove that transports listeners within the first few notes. Then theres “Been Losing Sleep,” with its instantly memorable reggae groove. With drummer Josh Freese (A Perfect Circle, Nine Inch Nails) now permanently installed behind the kit and Sublime bassist and co-founder Eric Wilson anchoring the group, Sublime with Rome are armed with an album that makes a real statement… their statement.