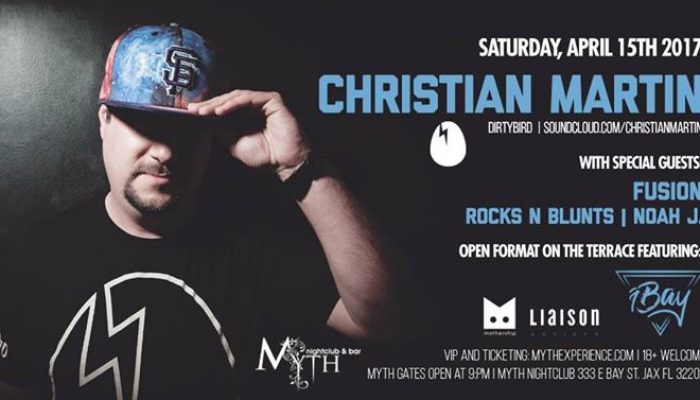 Myth Nightclub in Conjucntion with Kinesis Pro, I Love FL House and PMD is Proud to Present:

Myth Nightclub in Conjucntion with Kinesis Pro, I Love FL House and PMD is Proud to Present: CHRISTIAN MARTIN (Dirtybird) ———————————- Since 1995, Christian Martin has been exploring electronic music from one end of the earth to the other; from full-moon parties in the deserts of California to the thumping,dark corners of the London club scene. Christian followed his love for spleen-rattling bass to San Francisco in 2000, where he met up with the now legendary dirtybird crew. The dirtybird BBQ was the brainchild of the four original members – Christian & his brother Justin Martin, and friends Claude VonStroke and Worthy. They had a personalmission to change the landscape of San Francisco house music by throwing an epic free party in the park, based on their new signature sound.In 2003, with nothing to lose and everything to gain, Christian bought a massive yet necessary sound system on his credit card. This set the standard for a new era of die-harddedicated DIY producers, all with productions based on heavy bass-lines, smiling faces and dance floor delights. In 2006, Christian began releasing a steady stream of tracks, first collaborating withJustin under the “Martin Brothers” alias, as well as Claude VonStroke. The Martin Brothers partnership has produced such hip-hop influenced hits as ‘Duckface’, ‘Stoopit’,& ‘Dum’, as well as remixes for Ed Banger and Fool’s Gold. On his own, he’s released his own brand of bassy house music on labels such as dirtybird, Trapez, and Anabatic. His low end take on tech house has led to remixes for musical heavyweights such as Chromeo, Underworld, L-Vis 1990, and many more. Christian’s devotion to large scale bass has allowed him to champion the dirtybird soundout of the park and onto giant soundsystems at clubs and festivals worldwide. From Fusion (Germany) to Shambhala (Canada), to Coachella & Symbiosis (US), there’s a constant demand for what he describes as “bass from the ground up.” In San Francisco, Christian is a resident at dirtybird’s raucous quarterly party at Mezzanine; and also at Monarch, the newly opened marvel of a club. His new musical alias Leroy Peppers has recently roared to life, offering an even heavier take on hip-hop influenced bass music. Whether it be Leroy or Christian behind the decks, if your hands aren’t clapping your ass surely will be. ———————————- Along With Special Guests: ROCKS N BLUNTS FUSION (Orlando) NOAH J. (Sound & Mind Ent) ———————————- AND ON THE MYTH TERRACE:DJ IBAY (Open Format, Top-40, Hip-Hop, Dance) VIP Bottle Specials All Night Long – 904.707.0474 For VIP Reservations Visit http://mythexperience.com/project/vip…Please see the seating chart here:http://mythexperience.com/vip-areas/ Myth Nightclub: 333 E Bay St. Jax FL 32202 | http://mythexperience.com/ | 904.438.5173Myth Gates Open at 9:PM | Element Bistro Open for Drinks and Dinner Starting at 5:PM

This post about Christian Martin – Live at Myth Nightclub | 04.15.17 has been brought to you by TheJacksonvilleParty.com and WaterBedsNStuff.