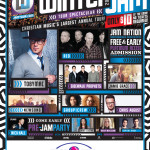 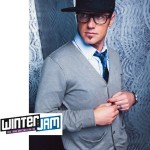 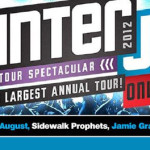 “As we prepare for Winter Jam’s 18th year, we are more passionate than ever about the ministry that drives the tour,” said Eddie Carswell, creator of Winter Jam and founding member of NewSong. “Led by TobyMac, this year’s line-up represents the diversity—and future—of Christian music. And we are thrilled that Nick Hall will be back with us to share the Gospel message, as that has always been the heart of Winter Jam.”

Earlier this year Winter Jam shattered its own record to become the #1 tour in the world (first quarter) for the second consecutive year, according to Pollstar’s 2012 Worldwide First Quarter Ticket Sales Charts – Top 100 Tours. Headlined by GRAMMY®-nominated alternative rockers Skillet, the 47-city tour saw 32 sold-out concerts and surpassed last year’s record attendance by more than 10,000, playing to a total of nearly 535,000 people.

Five-time GRAMMY® Award winner and multi-platinum selling artist TobyMac is known as one of the industry’s “most innovative and visionary artists” (Billboard). With over 11 million units in career sales, his fifth and latest solo project, EYE ON IT, entered the Billboard Top 200 chart at No.1, a first for a Christian act in 15 years, while also topping the overall iTunes Chart just hours after its release. In 2012 he celebrated his eighth consecutive GRAMMY® nomination, while his album Tonight received GRAMMY® nods for “Best Pop/Contemporary Gospel Album” and “Best Contemporary Christian Song” for the RIAA Gold certified track “City On Our Knees.” Prior to kicking off Winter Jam, he headlined his own “EYE ON IT” Tour, and will also headline his Hits Deep Tour in November and December, featuring Chris August, Jamie Grace, Group1Crew, Brandon Heath, Mandisa and Britt Nicole. NewSong has recorded 17 albums, garnering 20 #1 Christian radio singles and a GRAMMY® Award nomination, in addition to being inducted into the Georgia Music Hall of Fame, among numerous other achievements. The band’s unparalleled 30-year ministry has been highlighted by such defining songs as “The Christmas Shoes” and “Arise, My Love.” NewSong’s latest project, One True God, debuted at #1 on Billboard’s Top Christian/Gospel Albums chart last year and features the hit single “The Same God.” The group’s highly-anticipated new recording, Swallow The Ocean, is slated to bow in February. For further information on NewSong, visit www.newsongonline.com.

A complete list of Winter Jam 2013 Tour Spectacular dates and cities is available at www.jamtour.com. For further information, visit www.turningpointpr.com.