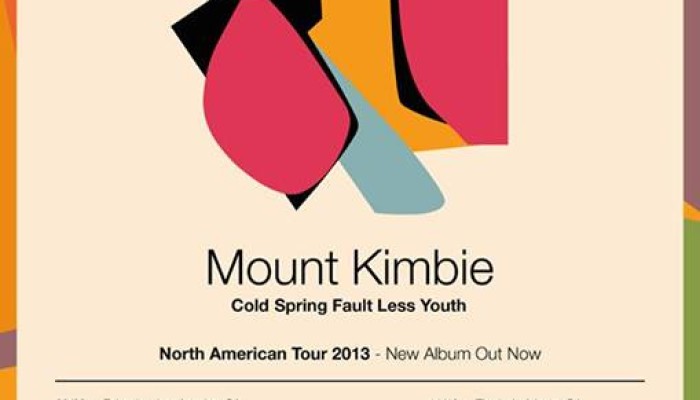 We (Mount Kimbie) had an amazing time touring the US in June, and after a summer of festival hopping over in Europe, we’re coming back, that’s right Mount Kimbie in Jacksonville!

Excited to get to some spots we’ve never made it to and also to return to all those that made us feel so welcome last time.

ps. If you didn’t hear, Mount Kimbie second album ‘Cold Spring Fault Less Youth’ is out now. You can buy it here.. :

“It’s a question of being respectful to each other,” Dom Maker says of the art of collaboration. It’s a simple ethic, but one that has yielded rich rewards. Since 2009, Maker and his partner in Mount Kimbie, Kai Campos, have played a central role in forging a new form for electronic music. Mount Kimbie’s influence stretches far beyond the tiny corner of the dance music underground that birthed them and, with the duo now signed to the legendary Warp label, it looks set to stretch further still in the coming years. Mount Kimbie have repeatedly confounded expectations, transforming themselves from bedroom-studio producers to creators of one of the most fully realised electronic album-length statements of recent years. This year, with the release of Mount Kimbie’s second LP, the perception of what Mount Kimbie is looks set to expand again. Still, at the heart of Mount Kimbie’s music lies that simplest of things: the meeting of two musical minds.
Campos was raised in Cornwall, Maker in Brighton. The pair met who make up Mount Kimbie in halls of residence while studying at London’s Southbank University and bonded over a newfound passion for electronic music – specifically the burgeoning dubstep sound. “We weren’t particularly trying to break into any kind of scene or anything like that,” says Campos. “We were just making music that we didn’t even think was that weird at the time, but when you look back on it now…” Mount Kimbie drew on their thick soup of influences to make a hybrid music that was intimate in scale but far from lacking in ambition. Back then they were oddities; nowadays the approach they pioneered is practically the norm.

The first evidence of the impact Mount Kimbie would have came with the Maybes EP, released on then-dubstep label Hotflush in 2009. The title track was a dazzling statement of intent – a melancholic anthem of sorts, combining a delicate garage shuffle with gaseous vapour trails of guitar and fragmented vocal melodies. It was swiftly followed by the more colourful Sketch On Glass EP, and within the space of a few months Campos and Maker found themselves at the forefront of a new wave of bedroom producers radically re-interpreting the dubstep template. “In the early stages of Mount Kimbie everything happened very fast,” Maker of Mount Kimbie recalls. “I remember the first show we ever did – actually getting paid money to play in this church in Oslo. It was a really bizarre feeling, almost like we’d cheated the system.”

Mount Kimbie kept a level head though, and, around an increasingly busy touring schedule, began to work on a debut album. Released the following year, Crooks & Lovers was not only the summation of Mount Kimbie’s career so far, but helped kick-start the so-called “post-dubstep” scene that would soon coalesce around them. The record consolidated Mount Kimbie’s signature sound – fragmented guitar licks, stumbling garage-inflected percussion, fractured vocals – and topped a slew of “best of 2010” lists in the process. In broadening and deepening their sound to meet the requirements of the album format, the duo also trailblazed a route from the dance underground to wider acclaim – a route that many have followed since.
“In that situation you’re flattered that people are paying attention to you,” Campos says of the significant impact Crooks & Lovers had at the time. “So naturally you think, ‘I’m doing something right here,’ and gravitate towards doing similar things. But at some point you’ve got to take a step back and say, ‘This is no longer what I want to do.’” Perhaps it was this need – to work out precisely what they wanted to do – that explains the duo’s absence from release schedules in the past two years. Certainly, with their second album, Cold Spring Fault Less Youth, finally completed, what Mount Kimbie “are” seems to have grown: they are more experienced, more mature, more self-aware. “Two years is a long time,” says Maker. “Tastes change, what you want out of your life changes, and so on. Naturally, how we want to sound has changed too.”

Fans will have noticed this change manifest itself in aspects of Mount Kimbie’s live performances. In recent years the duo have gradually migrated from playing in clubs to frequenting gig venues and festivals, and the addition of a drummer to their guitar, keys and percussion live setup makes the new Mount Kimbie feel considerably more like a band – in the traditional sense of the word. “I’m still really interested in [dance music],” maintains Campos. “It’s just that in some ways – for what we do – that world became quite limiting. The more traditional kind of presentation is much better for us, even if that means we’re playing at 9pm and the crowd aren’t on pills.”

Get tickets for October 12th, 2013 at Jack Rabbits

This mirrors a widening focus for the band. Where the soundworld of Crooks & Lovers was largely electronic, with fragmented guitar and vocal lines hinting at a human touch, their new material sees the duo embracing live instrumentation alongside a reinvigorated enthusiasm for electronics. In a sense, 2013 is the year that Mount Kimbie cease to be simply producers, becoming instead composers, performers, arrangers – in short, taking the reins of a project that’s more fully realised than ever before. Cold Spring Fault Less Youth shot through with warm organ chords and earthy live drums, feels looser, richer, and more enveloping than the duo’s past work. More significantly, vocals have a new prominence, functioning as the central protagonist in songs that move beyond dancefloor convention to explore forms which are definitely ambitious, but still feel like 2009’s Mount Kimbie. Cold Spring Fault Less Youth’s musical language evokes larger spaces, grander emotions.
Perhaps this is a natural progression for a band who are no longer new kids on the block, having embraced popular music in a manner similar to James Blake – a long-standing musical ally who was a member of the band for early live shows. Now entering their fifth year of success, the duo are aware that the rules of engagement have changed. “Things have gone as well as they could’ve gone for us so far, in terms of being a small band and finding an audience,” says Campos. “Certainly a bigger audience than we expected. But just because of the nature of our culture, people get very excited about new acts – and we’re not exactly new any more.”
Not new, perhaps, but arguably more exciting and relevant than ever. “Since the first record came out we’ve been learning to be better artists really,” say Campos. Cold Spring Fault Less Youth is proof, if it were needed, that that journey hasn’t been in vain.